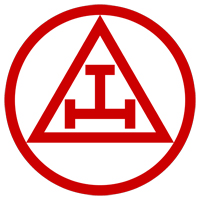 The Holy Royal Arch (Chapter) is the continuation of Craft Freemasonry and is a completion of your journey into “Pure Antient Freemasonry” The Book of Constitutions states ‘that Freemasonry consists of three degrees and no more, viz., those of the Entered Apprentice, the Fellow Craft, and the Master Mason including the Supreme Order of the Holy Royal Arch.’

The ceremony of the degree is based on the Old Testament telling of the return to Jerusalem from the Babylonish captivity to rebuild the city and temple. The Temple of King Solomon at Jerusalem, which we learn about in the three degrees of Craft Masonry, stood for about 470 years, until it was completely destroyed by the Babylonians under King Nebuchadnezzar. He killed many of the inhabitants of Jerusalem and exiled most of the rest to Babylon, leaving only a few behind to carry out farming and menial tasks.

After some 70 years, the Babylonians themselves were overthrown by the Persian Empire under King Cyrus who also conquered what was left of Jerusalem. Within a year, King Cyrus issued a decree allowing the descendants of those exiles from Jerusalem to return home, in order to help rebuild their Holy City and its Temple.

As a Candidate for Exaltation, you would represent one of those exiles returning to the ruined city of Jerusalem to help rebuild the Temple, or more accurately to help build the second Temple. Building on the teachings of the Craft, the Royal Arch encourages you to a greater understanding
of yourself and particularly your relationship with your God.

During the ceremony, you would remember that the First Temple at Jerusalem was destroyed by the Babylonians under Nebuchadnezzar. After the decree of King Cyrus, many exiles returned almost immediately from Babylon to Jerusalem, led by a Prince called Zerubbabel , and prepared
to build the second Temple on the site of the former one.

Proceeding through the ceremony, the next part would represent the entrance into Zerubbabel’s Council (or Grand Sanhedrim) to apply to work on some part or other of the building on the second Temple. Although we are working Masons, we are proud to be direct descendants of the Royal
line of David and Princely Tribe of Judah, which used to rule Jerusalem.
As Masons, we have carried out our instructions to clear the site of the former Temple, to prepare for the foundations of the second Temple. Whilst doing so, we have made a discovery which might be of great importance. We are now reporting this discovery to the Sanhedrim under Zerubbabel.

Just as the Second Temple was built on the site of the First, you would discover that the teachings of the Royal Arch are built on those of the Craft, to complete your journey in “Pure Antient Freemasonry”.