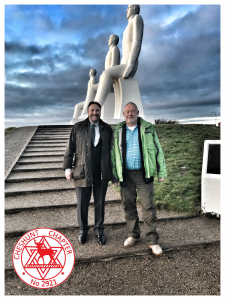 It is sad when a Lodge or Chapter has to close, and until very recently that seemed to be the fate confronting Cheshunt Chapter No. 2921; for the Chapter was struggling to find new candidates.  Our Province, however, was able to come up with an exciting alternative to closure.

Freemasonry has been present in Denmark since the founding of the Lodge of St. Martin in Copenhagen in 1743.  The regular Grand Lodge of Denmark, the Danish Order of Freemasons follows the Swedish Rite, which is somewhat different from British Freemasonry in that, instead of having a series of side orders that a brother may or may not chose to
join after going through the three degrees of Craft Masonry, the Swedish Rite has eleven degrees that a brother can work through in sequence (though few will get as far as the last degree in the sequence, “Most Enlightened Brother, Knight Commander of the Red Cross”).

Many of the degrees in the Swedish Rite are similar or equivalent to the degrees worked in England, but there is one striking omission:  up until now there has been no Holy Royal Arch in Denmark. On the 16th of December that changed.  Our Most Excellent Grand Superintendent, James Sharpley and Provincial Grand Treasurer, Tim
Huckle travelled to Esbjerg, Denmark to attend the official opening after the relocation of the Cheshunt Chapter No. 2921 from Cheshunt in Hertfordshire to Esbjerg.

Along with two other failing chapters, Cheshunt Chapter has been saved from closing and will now operate as a Royal Arch Chapter, under the Provincial Grand Chapter of Hertfordshire, in Denmark bringing the Holly Royal Arch to that country at last.